To share your memory on the wall of Shiela O'Leary, sign in using one of the following options:

Provide comfort for the family of Shiela O'Leary with a meaningful gesture of sympathy.

Print
A Celebration of Shiela's life will be held at a later date.

We encourage you to share your most beloved memories of Shiela here, so that the family and other loved ones can always see it. You can upload cherished photographs, or share your favorite stories, and can even comment on those shared by others.

Posted Apr 27, 2020 at 01:02pm
Sending all of our love to Uncle Brian and the family during this impossibly difficult time. Shiela will be so deeply missed by all that knew her. Her infectious laugh, kind eyes and big heart will never be forgotten. We hope that the many warm memories of her provide some comfort to you all in this time of great sadness. Deepest sympathies. -David Bakker and Family.
Comment Share
Share via:
CE

Posted Apr 23, 2020 at 08:01pm
Brian and family, We are very sorry to hear about Shiela. She was a great and fun lady and always laughing. Sending our sincere condolences to you and your family.
Dieter, Cathy and family
Comment Share
Share via:
S

Posted Apr 23, 2020 at 07:26pm
Shiela was the life of the party every single day at work. The kitchen was the hub of WDC, because of her. You could hear her laugh when you were upstairs! She was always there for a good laugh, or for a good talk. She had so much care and love for everyone she knew. Shiela will always be remembered for her very fun laugh (she'd even laugh after you'd startled her from walking into the laundry room!) My thoughts to the family.
Comment Share
Share via:
DI

Posted Apr 23, 2020 at 07:09pm
We were so sorry to hear of Sheila’s passing, she was a great gal. Our deepest sympathies go out to Brian and all the family. Our thoughts and prayers are with you all at this very difficult time. Ron and Donna Ingram

Posted Apr 22, 2020 at 11:08am
So sorry for your loss. Our thoughts and prayers are with the families through this difficult time.
Jim and Nancy Kidd
Comment Share
Share via: 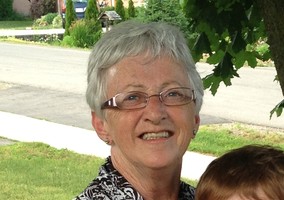