To share your memory on the wall of Ernest Leedham, sign in using one of the following options:

Provide comfort for the family of Ernest Leedham with a meaningful gesture of sympathy.

It is with broken hearts we announce the passing of Ernest "Ernie" Leedham in his 83rd year. Ernie passed peacefully at his home in Alliston, Ontario on Ma... Read More
MWO Ernest Thomas Fredrick Leedham, MMM, CD
February 20, 1938 - May 8, 2020

It is with broken hearts we announce the passing of Ernest "Ernie" Leedham in his 83rd year. Ernie passed peacefully at his home in Alliston, Ontario on May 8, 2020. Ernie retired as a Master Warrant Officer after serving 35 years with the Canadian Military. Ernie is lovingly remembered by his wife Marilyn Hatfield-Leedham, his daughter Donna Leedham (Tim Bruce), his sons Ernest Leedham (Kim Stencil) and Bruce Leedham. His step-daughter Charlene White (Larry), his stepsons Ken Wren (Manon), Kelvin Wren, Ted Draper and his many grandchildren and great grandchildren. Ernie touched many hearts in his travels and will be fondly remembered by his many friends from the Guards, Florida, New Brunswick, Nova Scotia, Ontario and his comrades from the Royal Canadian Legion Branch 147, in Barrie, Ontario.
Because of these difficult times there will be no funeral, there will be a Celebration of Life at a later date.
In lieu of flowers, memorial donations to the Heart and Stroke Foundation would be gladly appreciated.
Arrangements entrusted to Drury Funeral Centre in Alliston, Ontario.
Read Less

Print
A celebration of life will be held at a later date.

Donations are being accepted for: HEART AND STROKE FOUNDATION OF ONTARIO.

We encourage you to share your most beloved memories of Ernest here, so that the family and other loved ones can always see it. You can upload cherished photographs, or share your favorite stories, and can even comment on those shared by others.

Posted May 15, 2020 at 01:56pm
Dear Marilyn & family: Our thoughts & prayers are with all of you at this very difficult time. May your many fond memories give you strength for each new day. Sincerely, John & Isabel (Ireland).
Comment Share
Share via:

Posted May 13, 2020 at 11:11am
Our family is so sorry for your loss. Ernie was a great guy and fun to be around. Enjoyed the visits we had together last year. We are thinking of you and your family at this time. Love you guys! The Salowski's
Comment Share
Share via:
MJ

Posted May 13, 2020 at 07:54am
Rest in Peace dear Friend. You will always be loved and in our hearts.
Marjorie and Ted
Comment Share
Share via:
ND

Posted May 12, 2020 at 03:09pm
Dear Charlene,
My deepest sympathies during your time of loss, my thoughts/prayers are with you and your family during this difficult time. From Nadeem Dean, Acting CAO/Treasurer and Staff of the Township of Adjala-Tosorontio 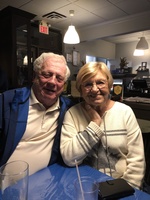 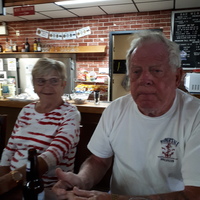