To share your memory on the wall of Robin Giles, sign in using one of the following options:

With deep sadness, the family of Robin Giles announces his unexpected passing, in his 95th year, on August 19, 2020 at the Royal Victoria Regional Health Centre, Barrie.
He is survived by Jessie, his beloved wife of 66 ... Read More
Robin Giles

With deep sadness, the family of Robin Giles announces his unexpected passing, in his 95th year, on August 19, 2020 at the Royal Victoria Regional Health Centre, Barrie.
He is survived by Jessie, his beloved wife of 66 years, by his three daughters Marian (Robert Jean), Cynthia (Paul Ramsay) and Eleanor (Dave Best), and by his grandchildren Octavia, Nicholas, Eric, Duncan (Josie), Sheila, Jeremy and Alison. A brilliant physicist and mathematician, he started his career at age 20 teaching and researching at The University of Glasgow, Scotland until moving in 1966 to Queen's University at Kingston where he remained until his retirement at age 68. He upheld the highest standards in both his teaching and his research and continued to research after retiring until stopping to care for Jessie through many years of her battle with dementia. Remembered for his eccentricity, humility,
honesty, open mindedness and generosity, he was one of a kind with a scientific, nonjudgmental view of any issue or problem. Unique and irreplaceable, he will be missed more than he would ever have imagined.
Care entrusted to the Drury Funeral Centre, Alliston. A private family gathering was held in Alliston with internment at a later date in Kingston. Many thanks to the staff of the Good Samaritan Retirement Lodge, Alliston for their care and kindness.
If so desired, donations in memory of our dad may be made to the Heart and Stroke Foundation or a charity of your choice.
Read Less

We encourage you to share your most beloved memories of Robin here, so that the family and other loved ones can always see it. You can upload cherished photographs, or share your favorite stories, and can even comment on those shared by others. 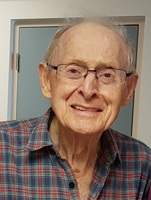