To share your memory on the wall of Barret McGee, sign in using one of the following options:

Our dear son, brother, father and friend passed away unexpectedly on Tuesday, April 13, 2021. Barret is survived by his two beautiful children - daughter Cheyanne Clark and his son Tatem Metz who he cherished more than anything. He leaves behind his mother LuAnne (McGee) Turner (Jim); his beloved siblings Talon (Brittany) Wilton, Devrann Wilton and Kelly Ionson (Sunny); his adored aunts and uncles who were always a source of comfort and support for him - Jo-Anne (Colin) Thain, Roseanne Dalla Riva (Mark), Bobbie-Anne Mazar (Harold), Alan McGee (Shannon), Tim McGee and Linda (Karl) Rose, Mike (Shauna) Wilton, Diane (Alan) Adams. Barret was predeceased by his step-dad Ron Wilton; aunt’s Brenda Harrison, Rosalind & Tammy McGee; grandparents Bob and Diane McGee and Ray and Gerry Wilton (Dirk). He also sadly leaves behind many dear cousins, nieces and nephews who he adored. Barret’s love of children, and his gentle and kind nature, drew the affection of any child he met and he often engaged them in child’s play at any opportunity. Barret was born and raised in Alliston and enjoyed many activities as a young man: Soccer, baseball, rugby and ping pong; he loved playing legos with his little brother Talon and of course enjoyed his video games. He also enjoyed skiing and fishing and family boat trips to Beausoleil Island in the summer. Barret’s insatiable appetite for knowledge saw him reading anything he could get his hands on and many an interesting conversation would ensue after a novel was finished... especially with his Aunt Jo.
At an early age Barret expressed his desire to be a police officer and with his strong sense of justice, and the desire to help others, I’m sure he would have been a great one.
His other passions were music, dancing, and singing his heart out with his momma.
Barret’s journey through life certainly handed him more challenges than he could ever have imagined and he coped as best as he could in the circumstance he found himself. It’s no secret to those closest to Barret that he struggled with his mental health for many years but it wasn’t until his early 30’s that our family understood just why that was. Barret was diagnosed with Schizophrenia - an insidious brain disease that would send his life into uncertainty and turmoil. He fought courageously, and now can rest peacefully - his heart and mind free from pain and suffering.
There will be a private viewing at Drury Funeral Centre for family only on Friday, April 23 followed by a public virtual Memorial Service (via ZOOM) at 4:00 pm.
ZOOM ID: 840 129 0324 / PW: Luanne
As expressions of sympathy donations can be made to the CMHA or Schizophrenia Canada.
Read Less

We encourage you to share your most beloved memories of Barret here, so that the family and other loved ones can always see it. You can upload cherished photographs, or share your favorite stories, and can even comment on those shared by others.

Posted Apr 25, 2021 at 09:04am
Dear Luanne and family,
Our deepest sympathy on your loss. You loved Barret well.
Janice and Chuck Kozuskanich
Comment Share
Share via:
MB

Posted Apr 23, 2021 at 07:22pm
Oh Luanne - so sorry for your loss. Condolences and love to you and all your family from the Biegel family. Our thoughts are with you at this sad time. Take comfort in those memories.
Maureen Biegel
Comment Share
Share via:

Posted Apr 19, 2021 at 06:23pm
Barret, I am at a loss of words, I may have only knew him in my childhood years as I can remember my father the late Ron Hunter Sr and your step dad the late Ron Wilton were close friends, I can remember going to sunset speedway too watch the racecars along with many trips go-carting. We may have grown-up far apart but became close friends via telephone over the last couple of years. We realized that we were alot alike and talked often of one day getting together, my friend Im gonna miss the random messages from you, but one thing is for sure I am truely honored that I was able too have known you. Say Hi too my dad for me and until we meet again my friend keep an eye on those you were close too. Im sorry too everyone who knew Barret for the loss of this loved one, and thank-you Barret for allowing me to have known you. Your Friend: Ron Hunter Jr.
Comment Share
Share via:
LT

Oh Ron ((( - thank you for your memories... They are helping me get through this tragic loss of my little "Bart". He loved you and spoke often of seeing you again. I wish so much you guys could have reconnected in person. I think of you often and hope you are able to join in his memorial service at 4 on Friday... what time would it be there? ) Take good care of yourself hon. sending you a big comforting hug. Barts momma bear. xx 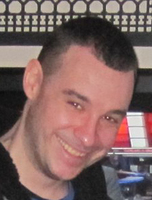 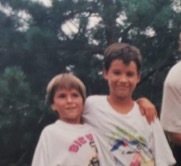 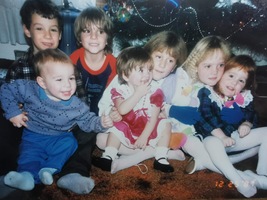