To share your memory on the wall of Gerda Schroeder, sign in using one of the following options:

We encourage you to share your most beloved memories of Gerda here, so that the family and other loved ones can always see it. You can upload cherished photographs, or share your favorite stories, and can even comment on those shared by others.

We helped your mom with the editing of her memoir. We were touched by the story of her life and blessed by her warm heart and good nature. She was so positive even in her declining health. Completing any book is a mammoth accomplishment. We were all so proud to be part of it.

We send you our deepest condolences.

She will be forever a part of our lives.

We all loved her.

Posted May 11, 2021 at 02:35pm
Dear Eugene, Laura and Ken
Sincerest condolences for the loss of you Mom.
My parents, George and Gertie Antesevic, were friends with Joseph (Seppie) and your mom in the late 50’s ..early 60’s . As German immigrants they had much in common regarding establishing a new life in Canada .
I still remember your Mom’s vibrant red hair!
Marijane Archer
Comment Share
Share via:
CR

Posted May 09, 2021 at 11:28am
Gerda was our lovely neighbour for many, many years. I remember so well when I first found out that our new neighbours were to be Hans and Gerda Schroeder, who I already knew well from the Horticultural Society. We could not have asked for gentler, kinder people next door. We shared many a talk over the back fence or driveway discussing our common love of gardening, our interest in each other's families and so many other things. I will certainly miss Gerda - her bright smile, laughter, and so much wisdom! Eugene, Laura and Ken and your families - you have our deepest sympathy. You were always such a strength to Gerda. The depth of your love and caring could not have been greater. Cynthia and Paul Ramsay
Comment Share
Share via:
CC

Posted May 08, 2021 at 07:33pm
My fondest memory I have of Oma was sharing some lunch time at one of our favourite local health food stores. As we talked about motherhood and shared experiences she made sure to remind me that everything I was doing for my family and how dedicated I was to them was evident of the type of mother I was. Oma wanted me to know that I was doing a great job as a mother and that I should never forget that. Well, Oma, I won’t forget that. And every time one of my little ones confirms to me that I’m doing a good job it will be a reminder of your guidance. Thank you for creating such an incredible family and gifting my family with a dear and special friend in Laura and her family. May you rest in eternal and healing peace.
Comment Share
Share via:
SH

Posted May 01, 2021 at 09:33am
We first met your Mum through the Alliston garden club. She was always wearing that smile even through the tough times. Lots of conversation about plants, flowers and everything "garden". Her famous punch was one of the highlights of our dinners. She will certainly be missed. Mothers are so special and memories so dear. Our sincere condolences John and Susan Heydon
Comment Share
Share via: 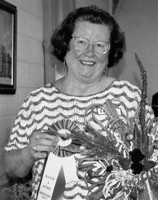